This was a very difficult topic for me.  See, my kid is twenty, so I doubt he qualifies as a kid any more.  I don’t know any kids right now, so I decided to cheat a little bit.  This has been a very tough summer.  I’ve lost four loved ones from my herd in the last month, the latest from a stupid accident on Saturday night.  Here is my memorial to them.

Lindy was only with us four 4 1/2 days, but I had already pegged her as a keeper.  She was so sweet honey would leave a bitter taste in your mouth after kissing her sweet face. 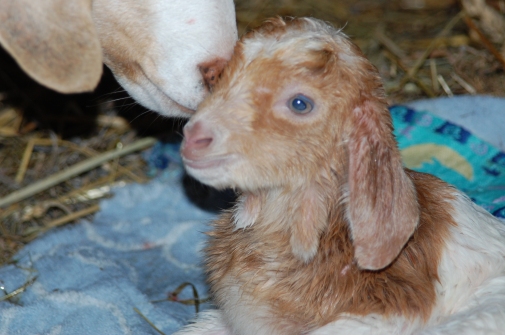 Oh, but she did have a bit of attitude.  She died from a stupid accident.

Misty faded away.  I think she may have had a genetic defect.  I knew her for two months, and she was so very sweet.  She was the third triplet of Scarlet.

Mabel was not a kid.  Goodness knows she had given birth to enough kids.  She had five sets of triplets in five years.  I wanted to breed her one more time because she and Goliath had the neatest little kids.  Feisty and funny and smart.  This time, Mabel only had two babies and a mummy baby.  It was so hard on her that I was afraid she wouldn’t make it until they arrived, and everything I did to help her recover did no good.  She died when her babies, Flower and Bud, were two months old.

Here she is with two of her kids from her second set of triplets, Bert and Ernie.

Last night my little Spice died from a freak accident.  She was big.  She was beautiful.  She was sweet.  She was a keeper.  Here she is as a new baby.

Here she is at three months old, lying beside her mom.

I’m sure you can see a lot more human kids and not so much sad at Perceptive Perspective.

I love to hear from you, so please leave a comment. If you are having problems leaving a comment Wordpress has made changes to require you to log into your Wordpress or Gravatar account associated with the e-mail address. You can try a different e-mail address, or I have enabled people to leave a comment without an e-mail address. Sorry for any inconvenience because I love hearing from you and want to make it as easy as possible for you to communicate with me. Cancel reply

This site uses Akismet to reduce spam. Learn how your comment data is processed.