Lying on his deathbed, dying of cancer, Bob Feller is a baseball legend.  He began playing at the age of seventeen with the Cleveland Indians.  He returned to Van Meter, Iowa, for his senior year of high school.  He is a hall-of-fame pitcher, had a candy bar named after him, and will be greatly missed. 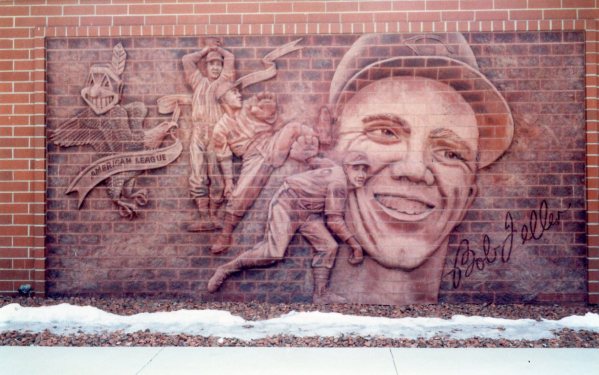 I visited the Bob Feller Museum with my son and nephews when they were in 5th grade, and my son had been assigned a project on Bob Feller.  It is a great museum.

If you have written a 55, a story in exactly 55 words, be sure to tell G-Man.  He will come and visit and leave his comment.

Be sure to visit http://magpietales.blogspot.com/ for more poems and stories inspired by the photo provided by Willow.

When Alice was searching the attic in her parent’s old farm house for the lost box of Christmas decorations, she uncovered her old sled. Maybe it was her brother’s sled, for they were identical.  It had been the best Christmas ever.  She and her brother, Alexander, were so excited when they raced down the stairs and discovered twin sleds with bows underneath the Christmas tree.  They were both so anxious to try them out they could barley eat breakfast and look at the fruit in the stockings hung on the mantle.  Even though the Depression had ended, recovery was slow in the rural area where they lived, and the sleds were beyond what they could have hoped for.

The kids put on their boots, coats, hats and mittens and rushed out the door.  Their farm had wonderful sledding hills, and they were finally going to get to try them out!  Time and again the kids pulled the sleds up the hill only to go racing at breakneck speeds to the bottoms below.  By the time the two returned to the house, their cheeks were red and numb with cold.  All the cousins had arrived and the smell of roasting turkey greeted them before they opened the door.

After the family feast, they returned to the hill, taking their cousins, and everyone had fun with the new sleds.  Annie went sideways, fell off and rolled all the way down.  She stood up wobbly and laughing!  Sammy hit a rock and flew into the air.  Other than those incidents, it was pure snowy bliss, the stuff holiday cards are made of.

Remembering the good times, not just that Christmas day, but the years of growing up on the farm, made Alice realize how much she missed her brother.  It had been years since their fight over their father’s care.  Now Dad gone and their mother was in the nursing home.  Her brother hadn’t spoken to any of them since the decision to let their father pass instead of putting him on life support.  Now, it seemed like it was happening again as her mother’s health was failing, only this time she would be left alone.

It was the Christmas season, she reasoned.  What better time to extend a hand to family and call a truce and try to mend broken relationships.  She walked to the phone, picked up the receiver, and dialed her brother’s number.

as sweet as honey

treasured pieces of your love

your kisses to me

Jenny Matlock’s Alphabe-Thursday is on the letter K this week.  Be sure to visit Jenny’s blog for more K posts.