In 1776 wise men set forth
“Resolved, That these united
colonies are, and of right, ought
to be free and Independent States.”

Those men signing the Declaration
were brave men; good men;
seeking to grow a country with
open arms to all who wish to come.

Love of country turns to nationalism–
refusing anyone who might be different;
men desiring only those in their likeness–
they, and Nazis, are not good men.

Humbly, I ask you if you can tell me
what to the immigrant is the 4th of July?
Is it celebration of reaching asylum?
Is it relief in the freedom from violence?

“By the rivers of Babylon, there we sat down”
crossing the Rio Grande to start a life new.
fleeing tyranny of murderers and gangs.
Dangers too dangerous not to risk the dangers.

What to the immigrant is your 4th of July?
I answer: a day to reveal gross injustice;
a day to reveal racisim and hatred–
your cruelty to the constant victim.

Your celebration a sham! A military parade:
might and strength to honor the dishonorable;
talk of freedom and greatness, a mockery!
Parade the disgrace of a nation of kidnappers.

A young mother without her baby,
shirt stained in leaking breast milk,
cheeks streaked with unrestrained tears,
unwashed and unsuckled with empty arms.

A toddler with urine-soaked diaper
hungry and cold with no one to hold;
only glaring lights: no shampoo; no towels;
no sparkling water from a glass bottle.

Drinking water from the toilet, lapping
like a stray dog, panting, wretching.
In the ice box cold of a harsh cage.
No family to take us from this pound.

What to the immigrant is the 4th of July?
A day to reveal the racism and hatred
cloaked within the hearts of men and women
hiding behind their fearmongering lies.

I would like to recognize Frederick Douglass “more and more” for his work and for inspiring my thoughts on the 4th of July.

The Weekend challenge at Real Toads is to write a flash 55–a poem or story in exactly 55 words.  The extra challenge today was to be inspired by George Orwell’s 1984.

Trump the
BLUNDERER
signs WiThOuT
READING
tweets without
THINKING
GoVeRnS for
HIMSELF
Cabinet positions
SOLD
in ChRiStIaNiTy’S
NAZI name.

Rule by
CONSTITUTION
Don’t FoRgEt
COMPASSION
No HaTrEd
ALLOWED
within our
BORDERS
secured with
JUSTICE
EnFoRcEd by
COURTS! 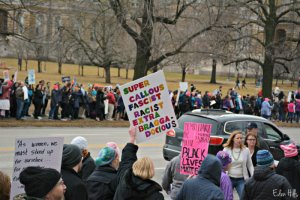 It’s amazing the Women’s March on Washington ever actually took place.  From early on there were squabbles.  Different groups of women felt slighted.  Some jumped on this lack of cohesiveness and mocked it.  I have to admit, I had to remove myself from some Facebook groups because of the downright meanness of many interactions. However, before judging women on their inability to band together, think about how that would go if you asked every man in the country to get along simply because they all have a Y-chromosome:  black, white, Christian, Muslim, rich, poor, gay, straight.

Seems pretty laughable.  Yet, that’s what these women were attempting to do–unite a highly diverse group joined only by gender and their desire to voice their protests against a Donald Trump presidency.  And they did it.  And they did it peacefully with record-breaking numbers!  Am I the only one to find it ironic that the estimated total number of protesters is pretty much the same amount by which Trump lost the popular vote?

I agonized over not being able to attend the march here in Iowa, but I really knew that if I attempted to go by myself, I’d get lost and drive in circles for possibly days.  And I would have had to go by myself.  I have felt completely isolated in my very, very red state since well before the election.  There are a couple of co-workers that I can discuss politics with, but I couldn’t throw myself at them, begging to take me to the march too.  I decided to settle for attending the legislative breakfast sponsored by my union at work.  I got to meet our long time representative, Mark Smith, and our newly-elected senator, Jeff Edler, to discuss issues revolving around education.

A chance comment by the union president at the end of the meeting left me gushing about how jealous I was that she was headed to the march.  She said to join them, and in an uncharacteristically bold move, I grabbed my camera from the car and went with her and another teacher.  I cannot thank them enough for letting me tag along and be a part of this historic moment because I believe strongly that it is not just a right, but a duty, to peacefully protest when the government becomes dangerous to its citizens.

One of the first observations I made as we drove towards the capitol building was the diversity of the group.  Granted, it was Iowa diverse, but there were many men, different ages, and different groups represented.

As we drove past (sorry for bad photo quality, but some photos were taken through the window of a moving vehicle), I couldn’t even keep up with all the different protest signs–women, Planned Parenthood, Black Lives Matter, education, and others.  It became quickly apparent to me that this was not a women’s march.  This was not about being a sore loser and wishing Hillary Clinton was president.  This was a march to make sure Donald Trump and Republicans got the message that they do not have a mandate to run the country on a platform of hate and fear with complete disregard for the benefit of all people.

The afternoon’s rally had to be moved outside to accommodate the large numbers of people.  As I listened to the speakers, I got to hear the perspective of the LGBTQ community, NOW, Native Americans, Disabled Americans, Muslim immigrants, and Refugees.  Every group that spoke was respectful of others.  The crowd applauded and supported each group with their concerns of how a Trump presidency put them at risk for their civil liberties and even their lives. 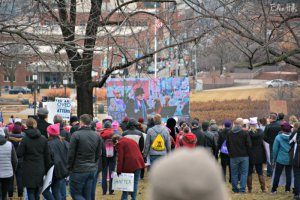 While I’ve heard from conservatives that they didn’t get the march and we should just give Trump a chance, I will not wait until it is too late.  This is certainly the time to let our elected officials know that we do not support the destruction of the Affordable Care Act (Obamacare), defunding Planned Parenthood, and gutting public education.  We have to let them know we support the Paris Agreement on Climate Change to reduce global warming, science-based decision making, and a strong free press.  Those of us who protest are fighting for the rights of all Americans, even those who helped put Trump in the White House and will suffer from the policies he institutes and the laws he repeals. 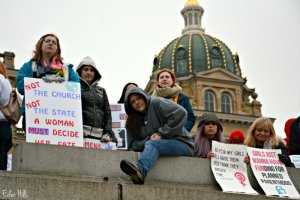 This march helped to restore faith in my great state.  Between speakers, one of the organizers took a moment to address the crowd, sharing that she was serving as the lost and found.  It made me extremely proud to be a part of a movement of 26,000 people that would turn in keys and driver’s licenses and credit cards, so that they could be returned to their owners.  It gives me hope.  I know we will continue to be an extremely diverse group united to protect our great country from this kleptocracy.

You can see all the photos I took at the Des Moines Women’s March HERE.